In September 2018 I spent 3 weeks on residency at Cove Park in Scotland. Immersed in a landscape of ferns, wood, water, hills, bracken and stone I developed my sculptural practice, writing and drawing in response to living in this place. 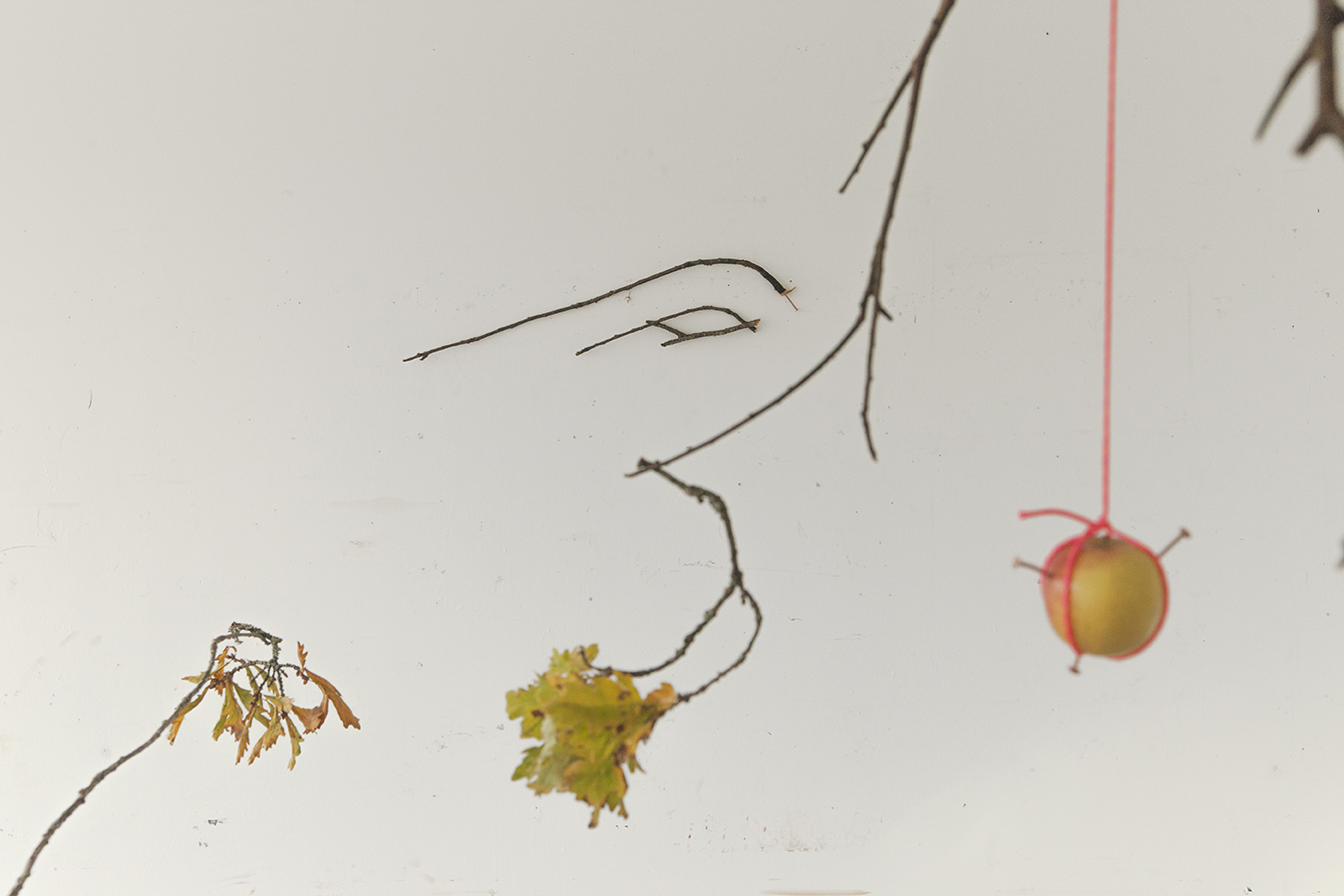 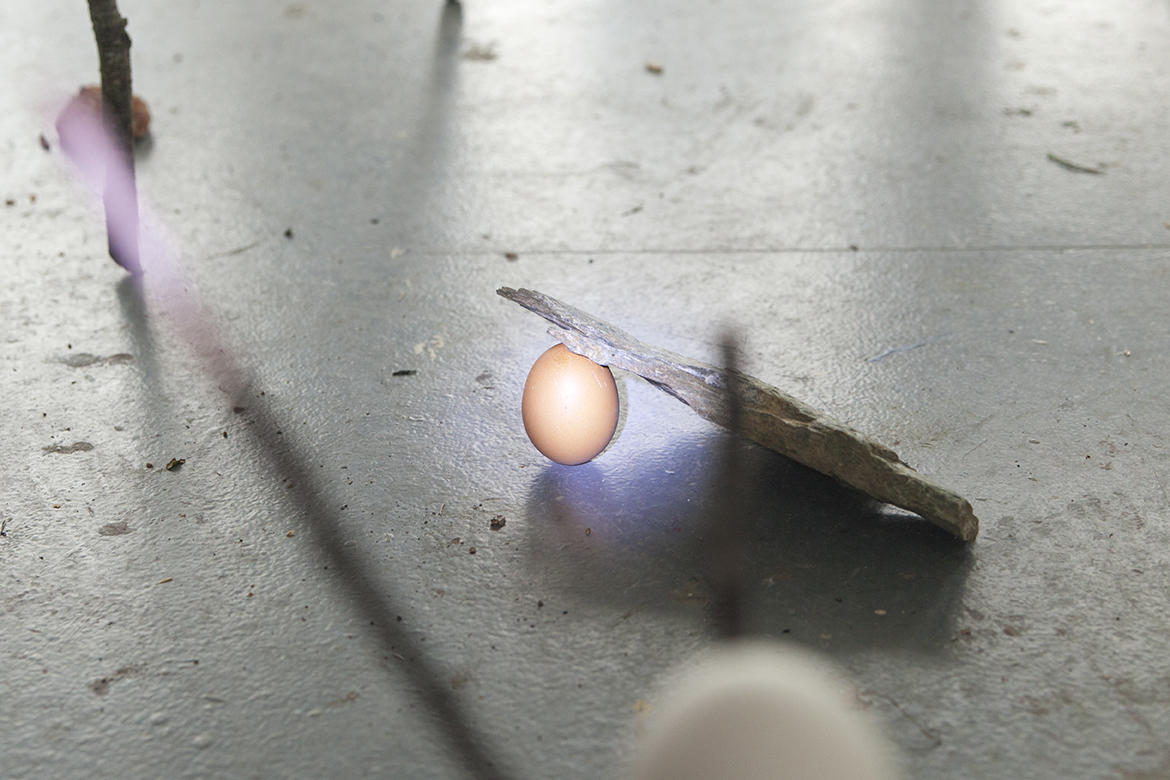 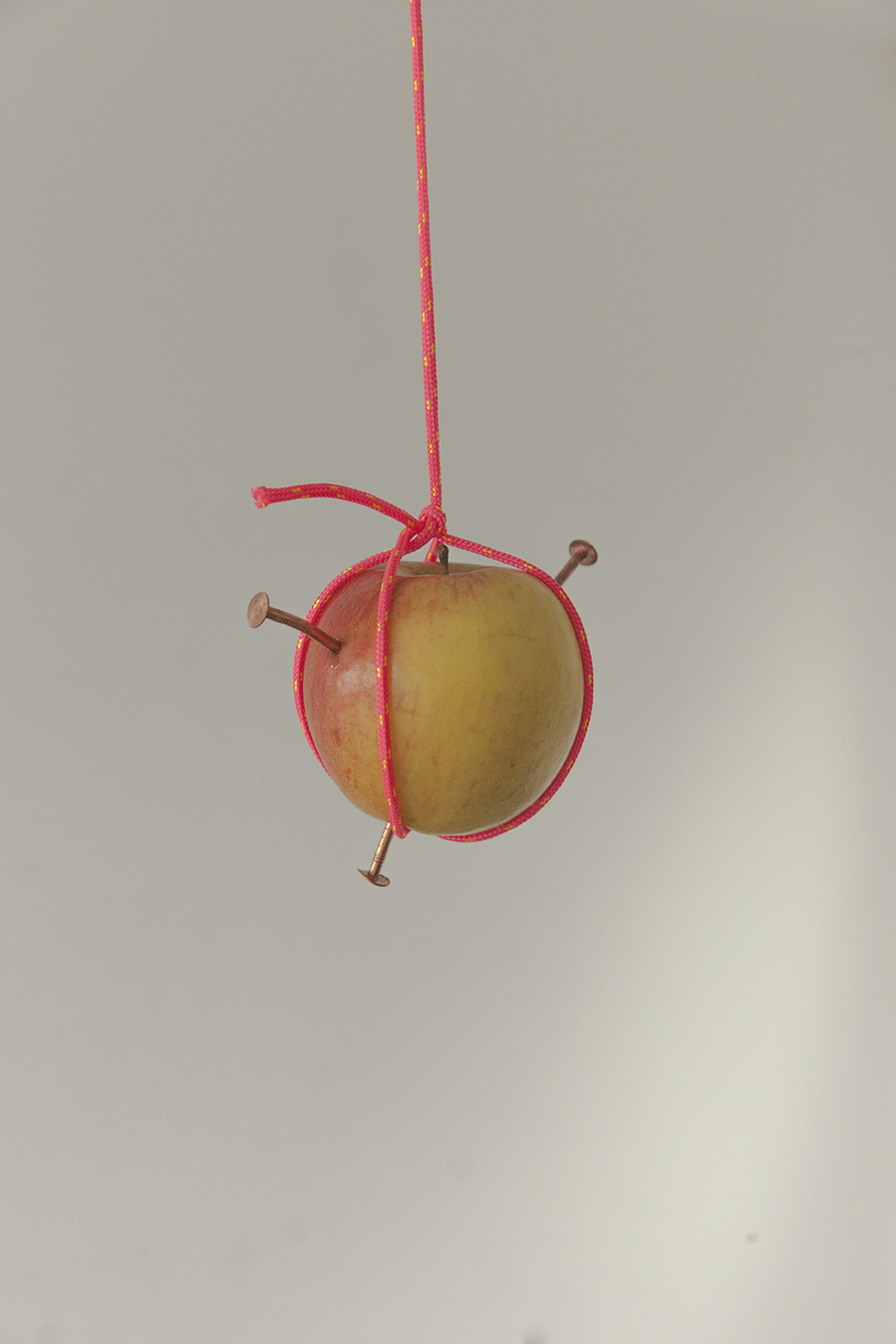 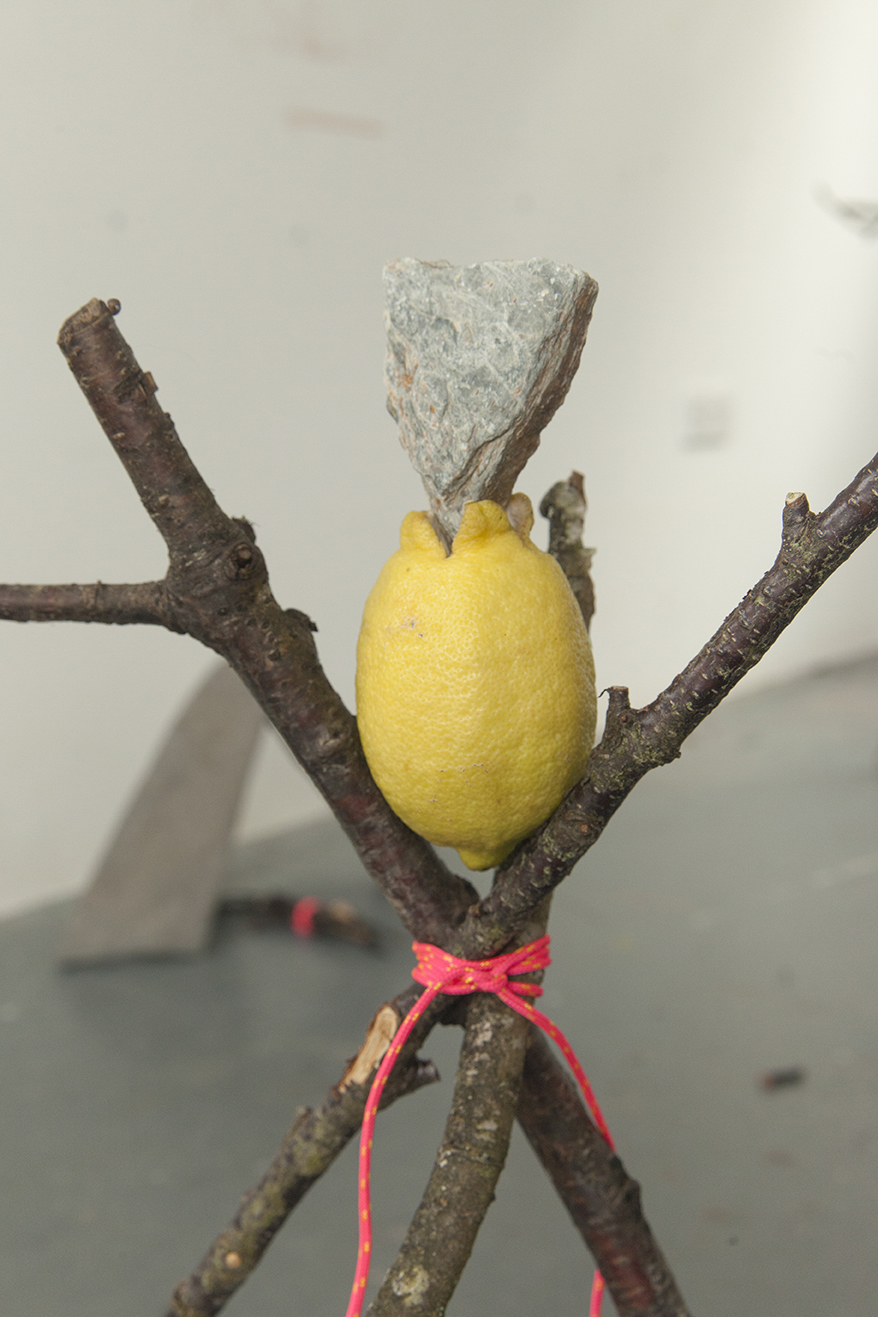 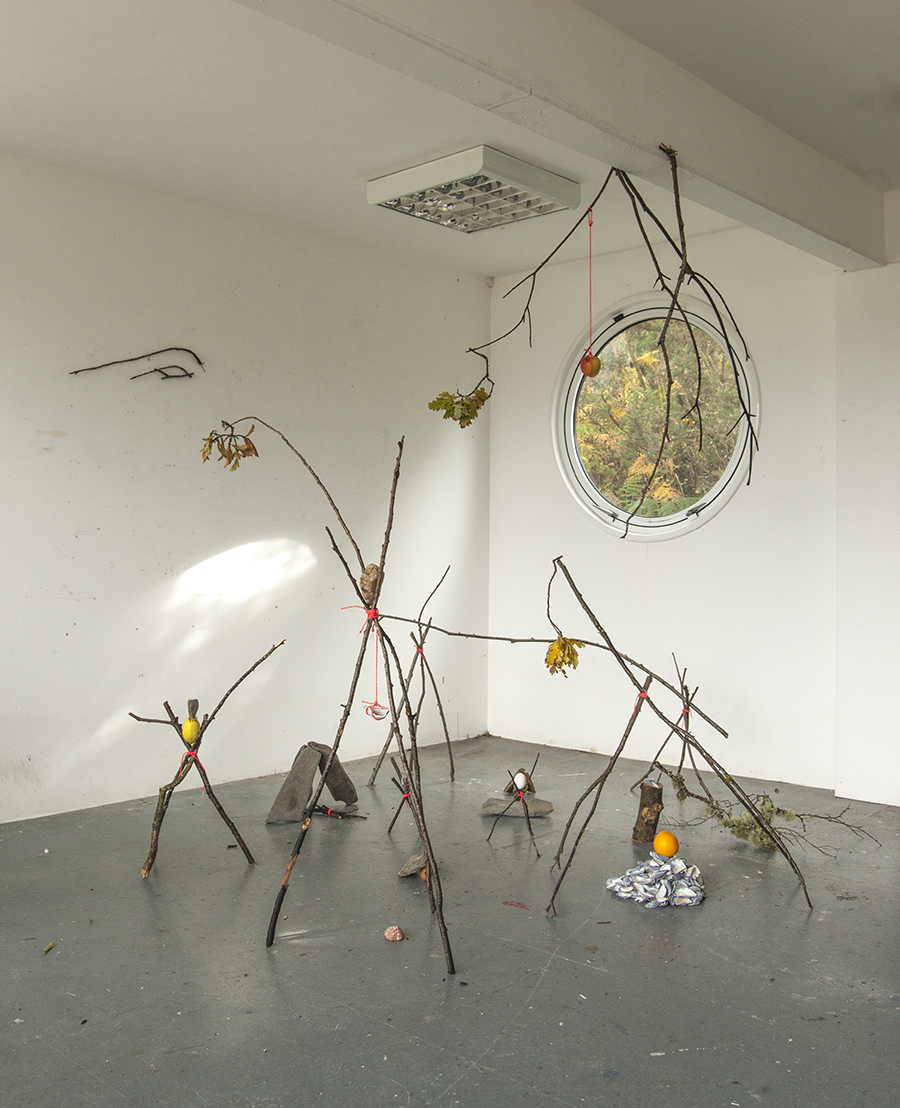 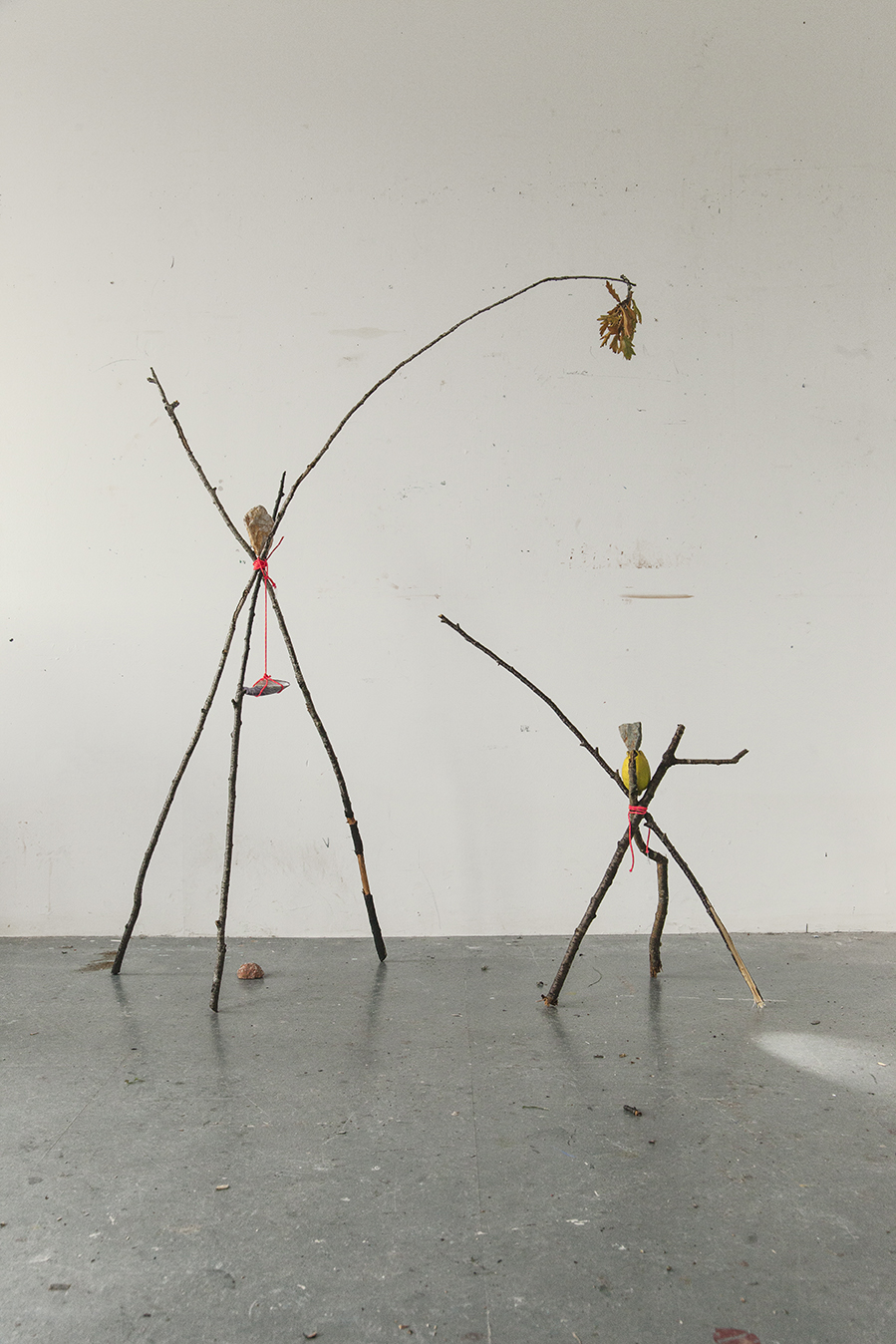 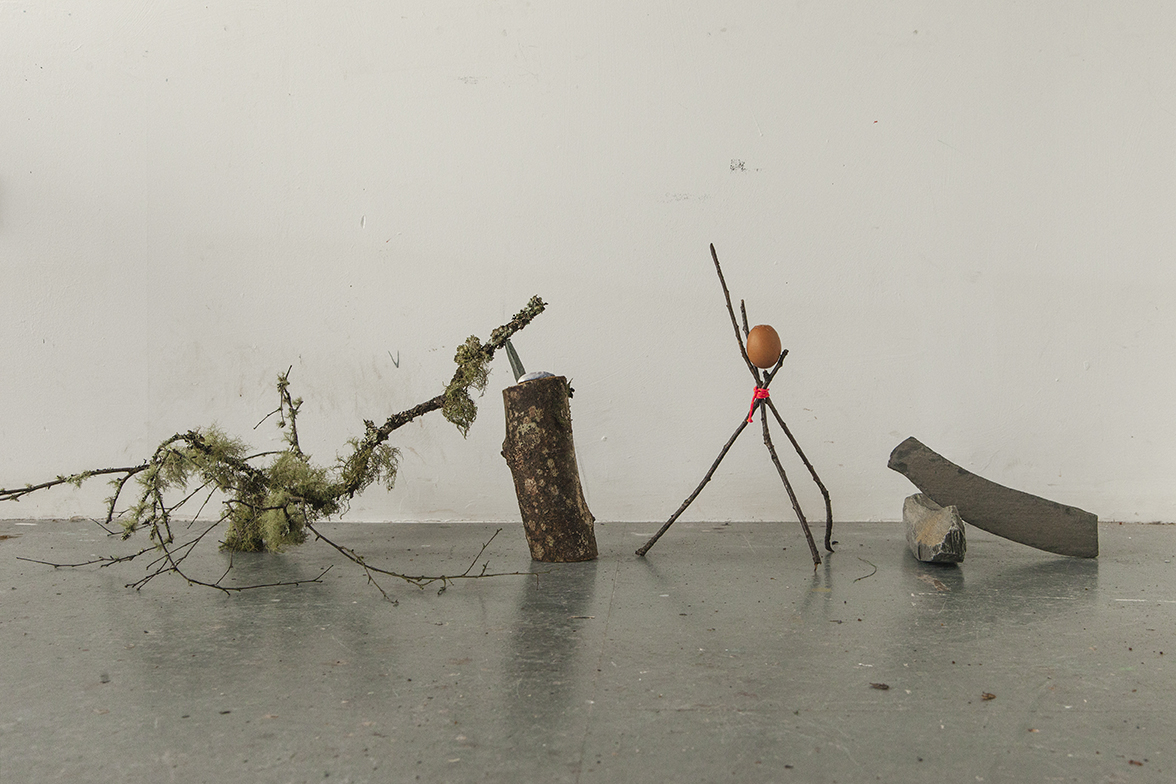 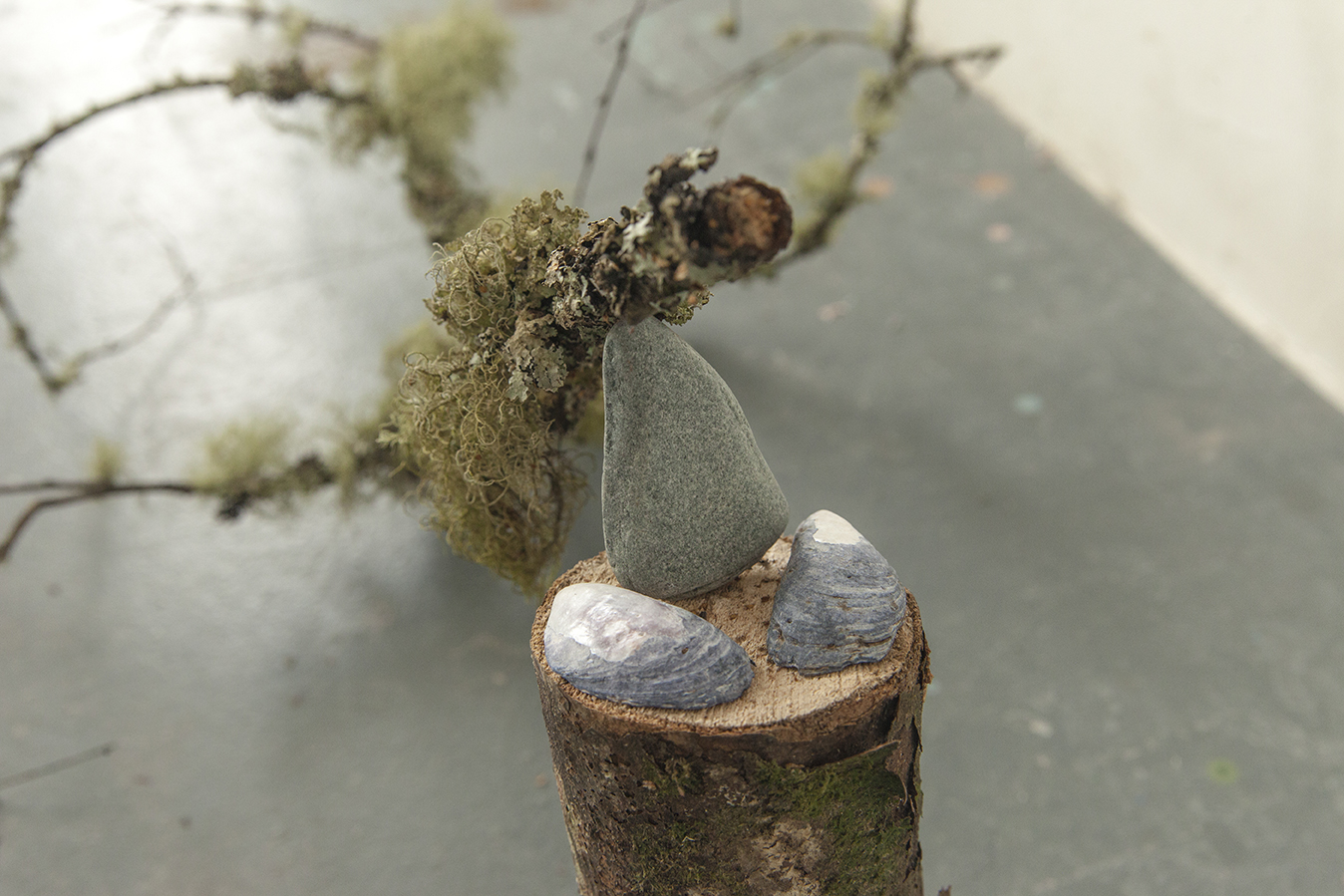 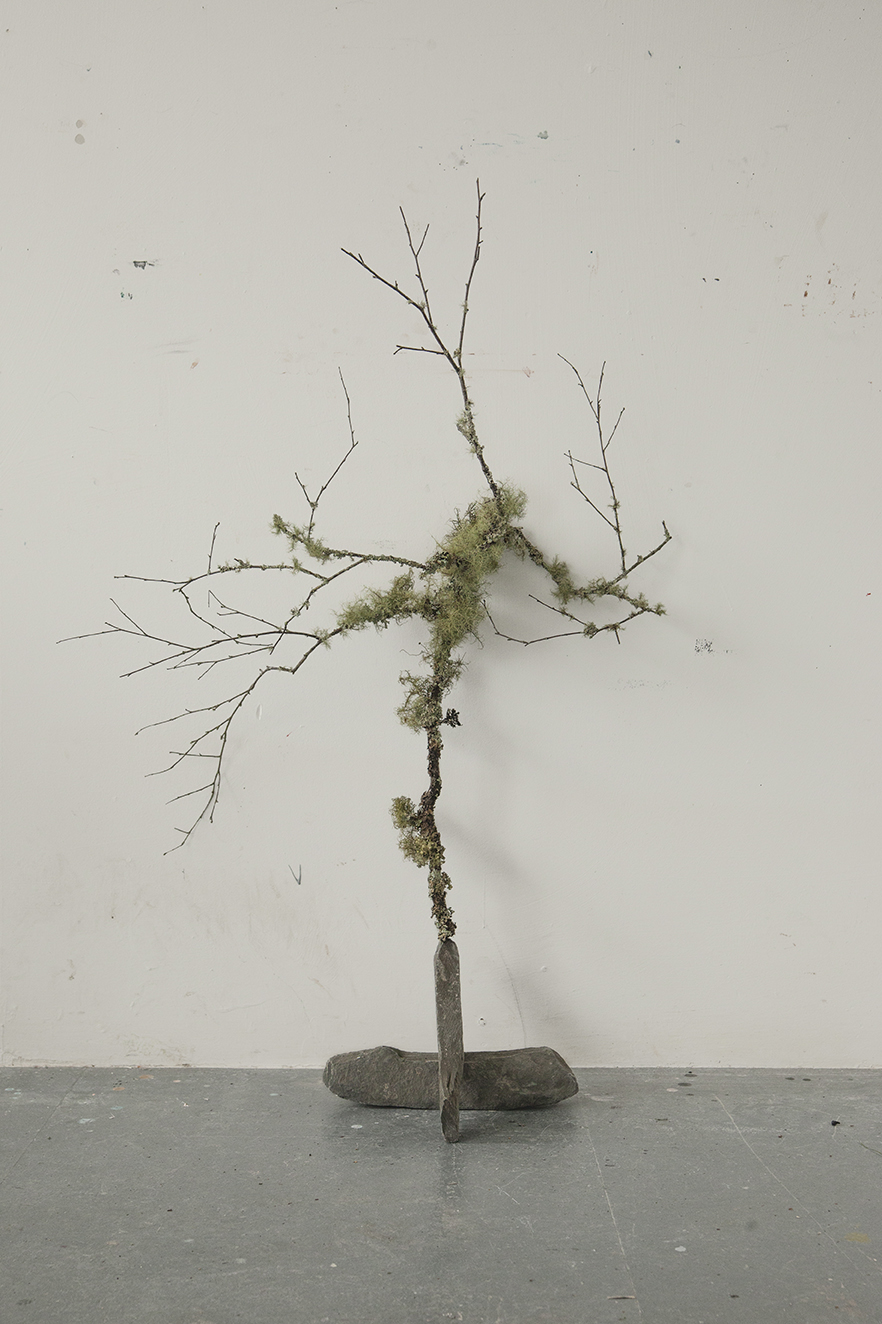 What is it about putting an egg on a cradle of sticks that makes it feel alive? That makes the egg feel somehow artificial (man-made?), its perfect geometry, its gentle form seems somehow more than real in contrast to the dun, kinked, discarded twigs. But of course its all the same; there’s no hierarchies in nature. A twig is nature and so is an egg. Is it because we eat eggs? Is that the source of its symbolic quality? A single egg is all eggs, a single stick is just that particular stick, it remains individuated as there’s no need to transfer it in to a symbolic linguistic or gastronomic structure. The citrus seem unreal too. Against the autumn branches they are almost too vivid, interlopers in the place by the pond, too rich to really be here. Like the gunnera and the rhododendron they are ‘non-native’. Aliens, but aliens for ingestion, aliens to be absorbed in to our bodies, for unity and synthesis with our cells and the cells we host inside us, symbiosis through our mouth holes. Where does the hierarchy come from? Why is fruit more real than sticks? It’s all a game of perception and quantifying. 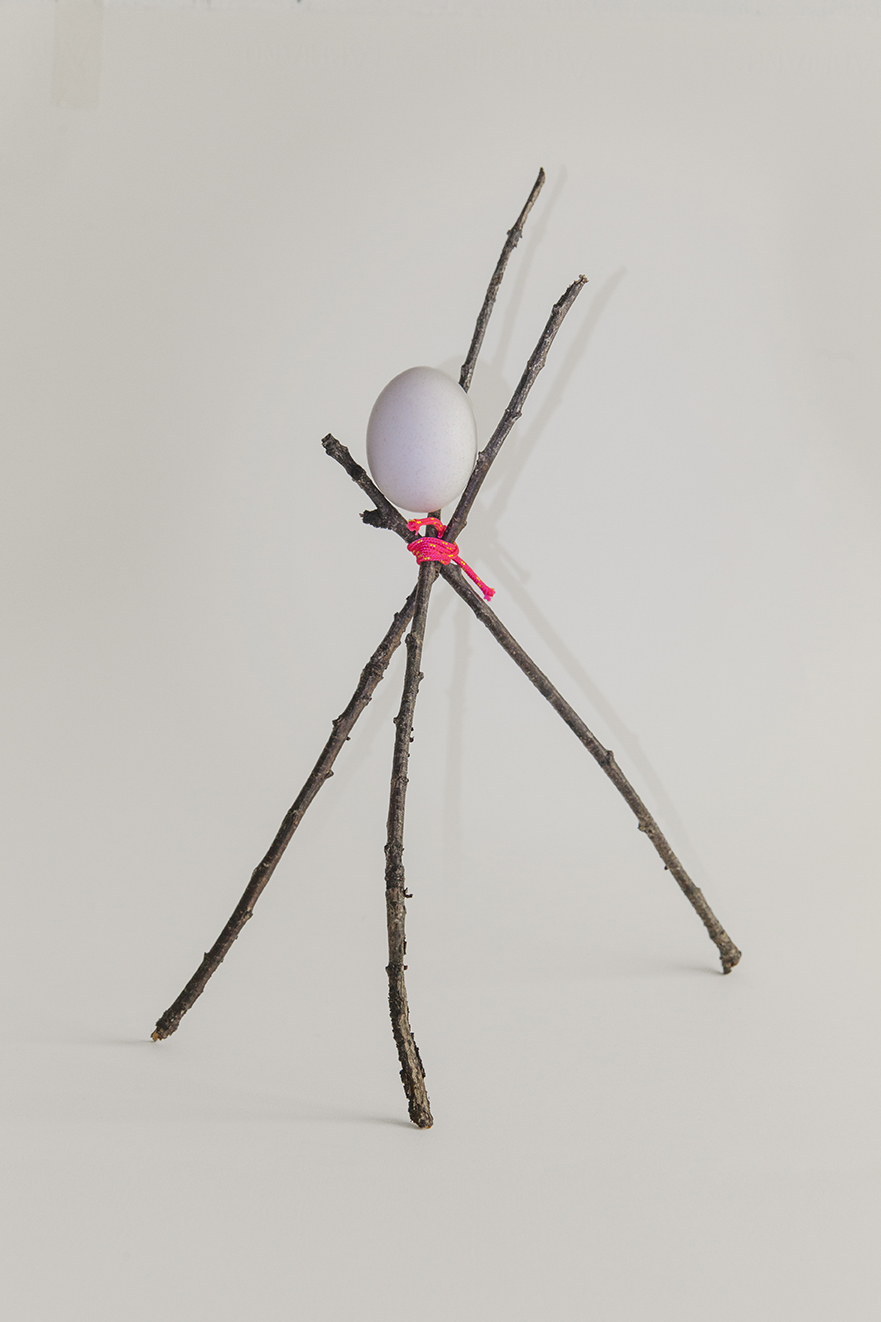 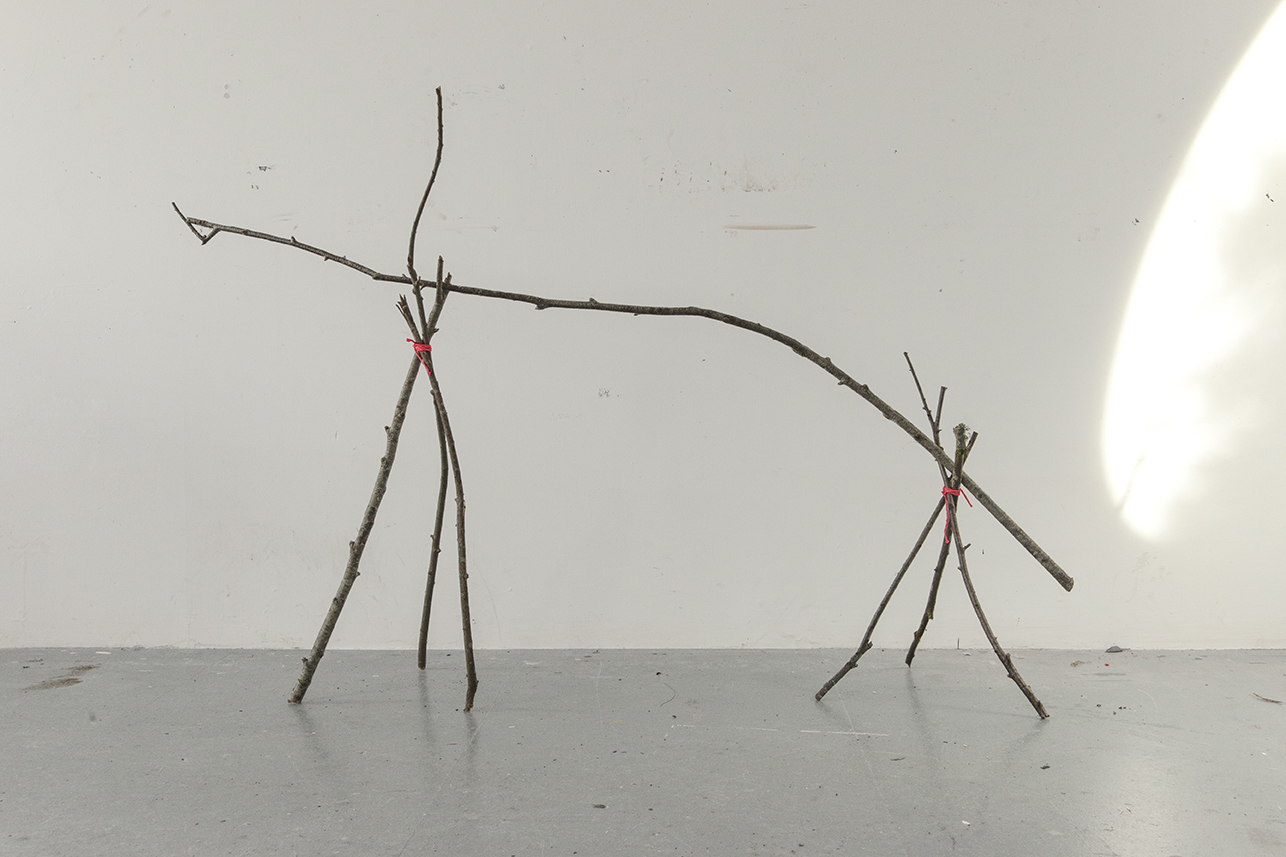 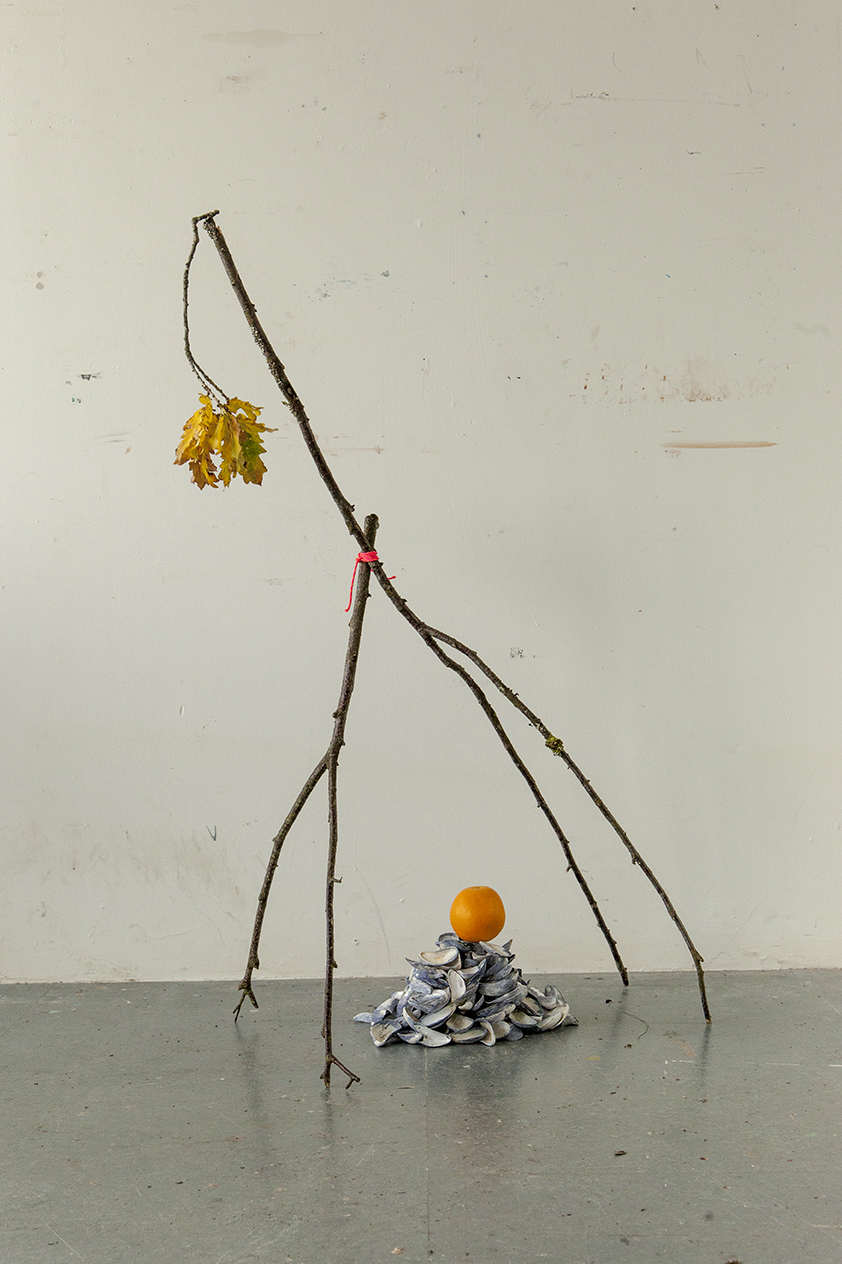 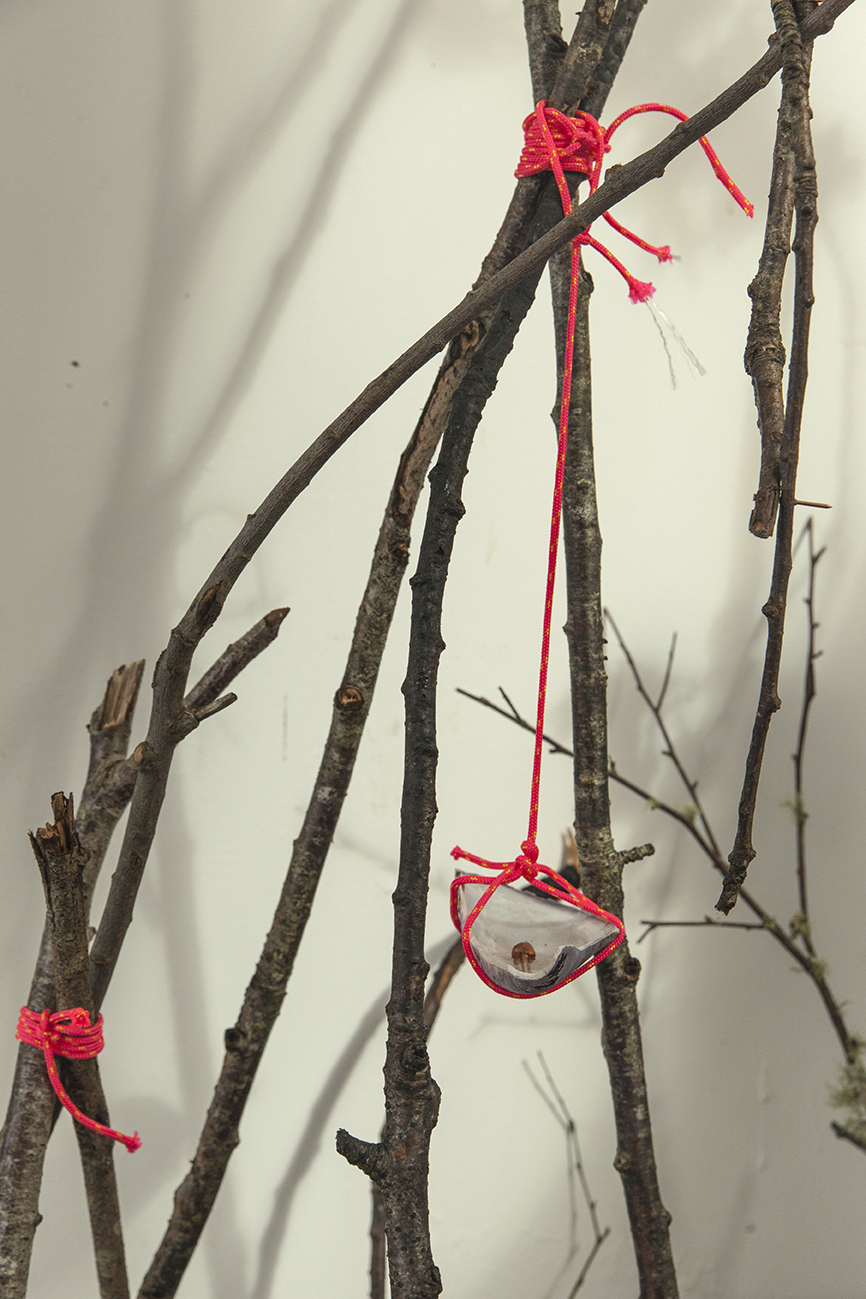 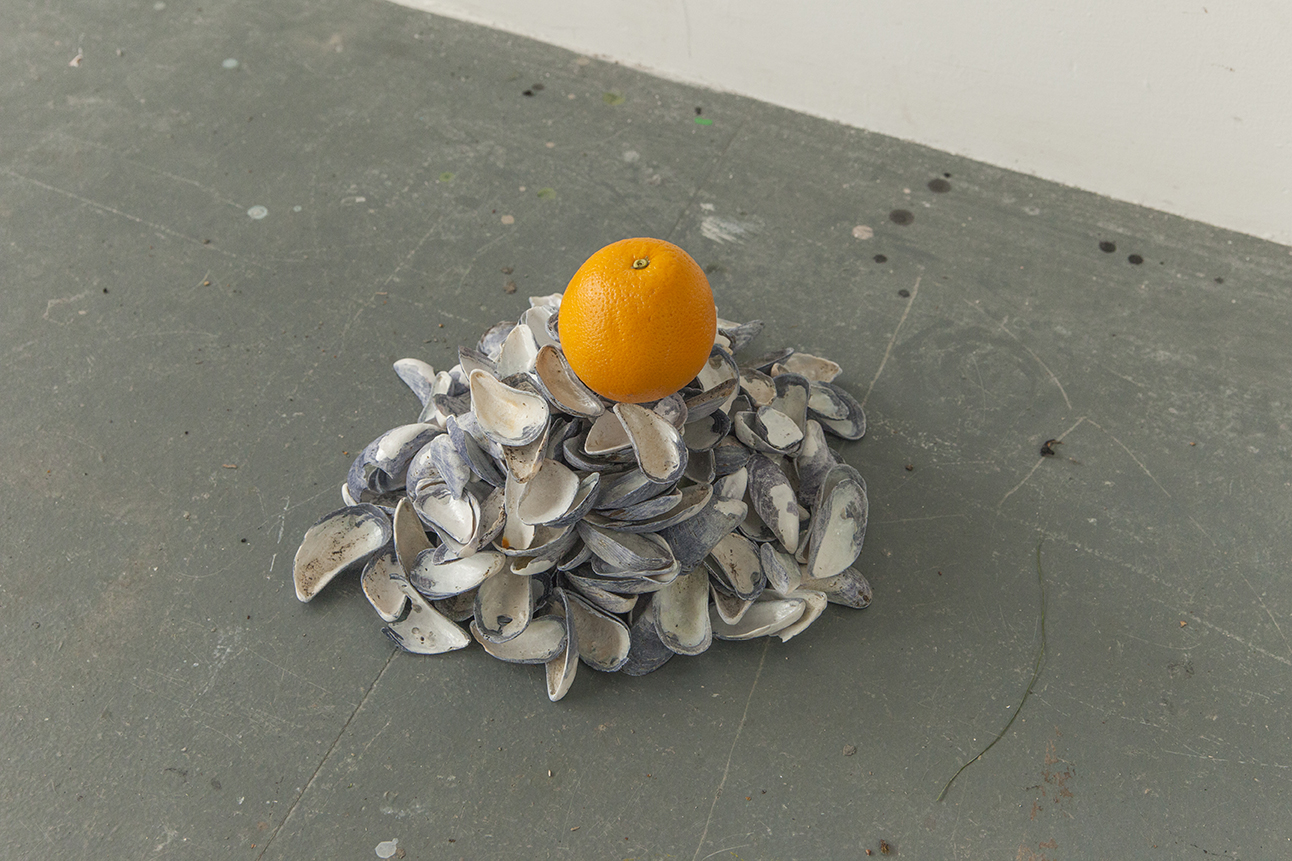 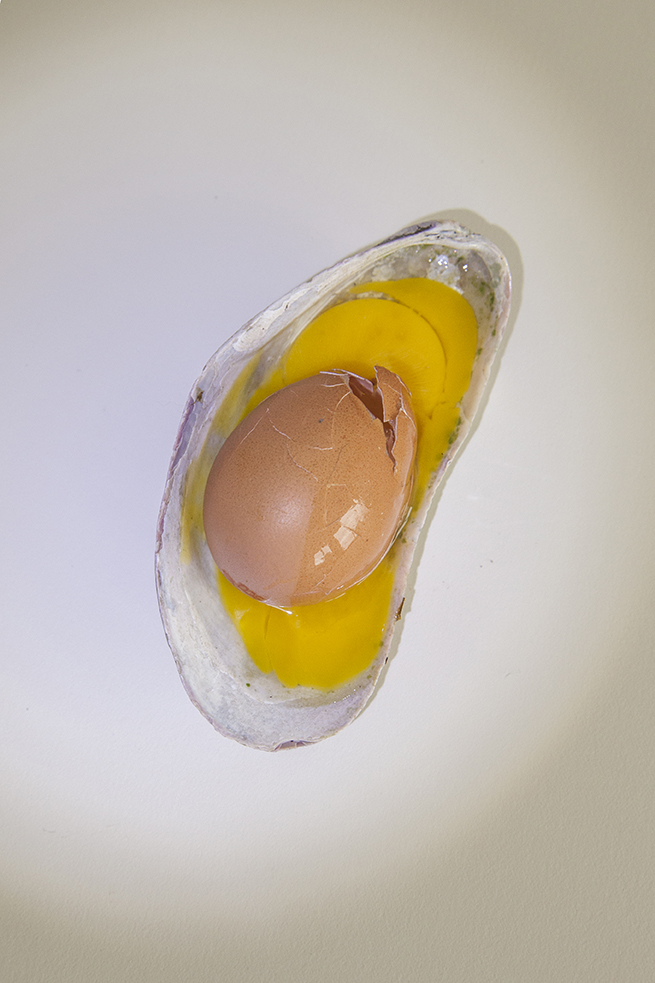 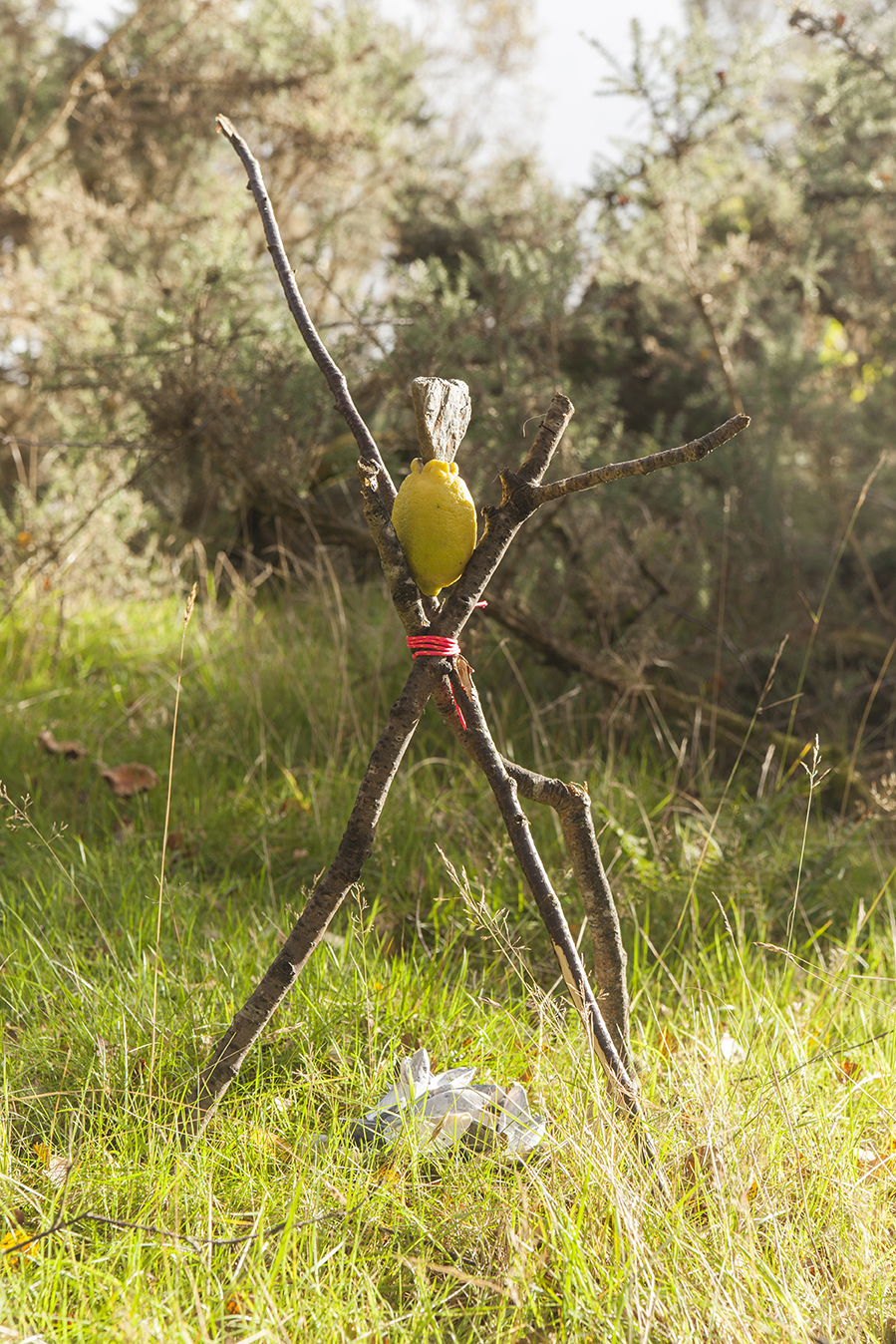 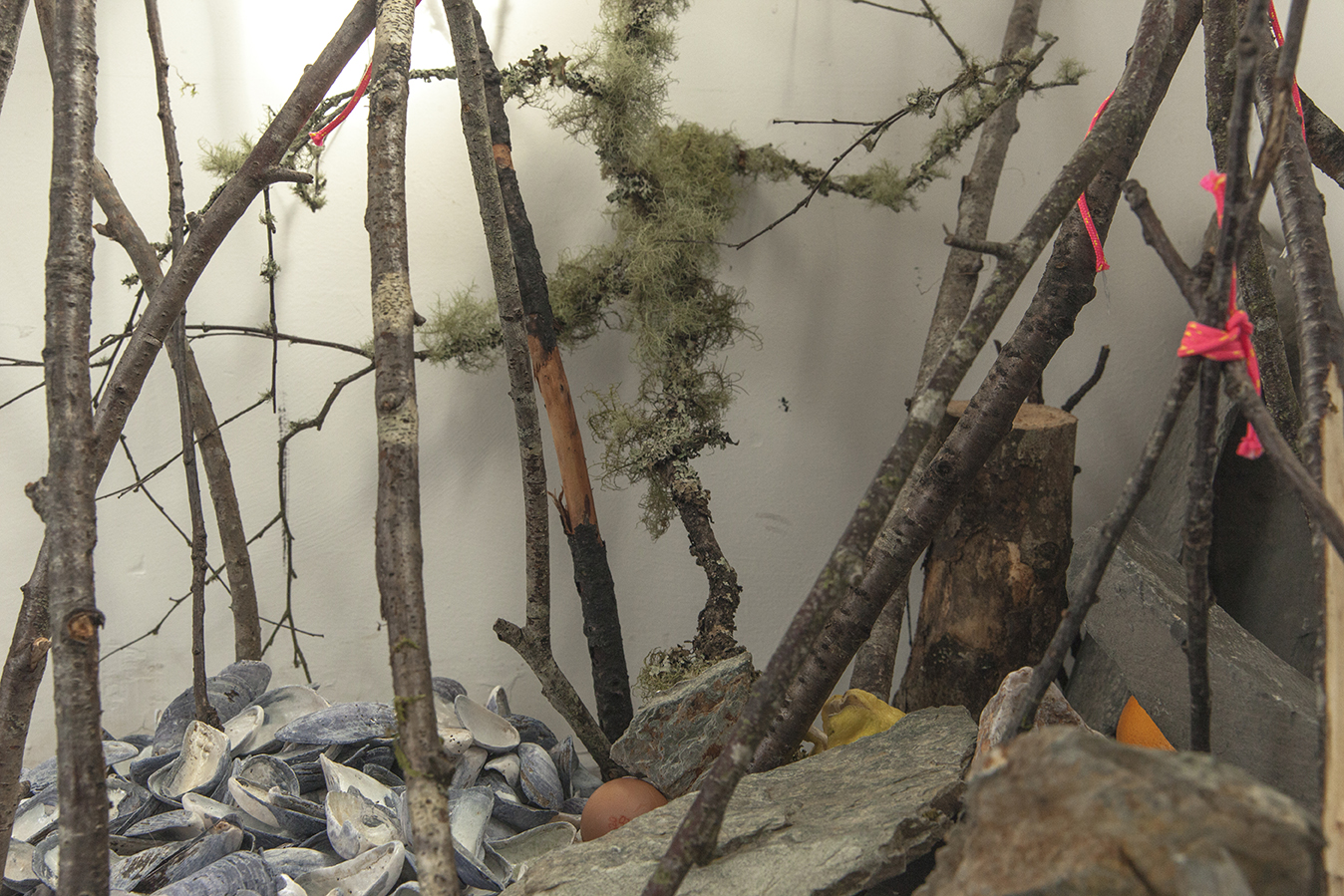 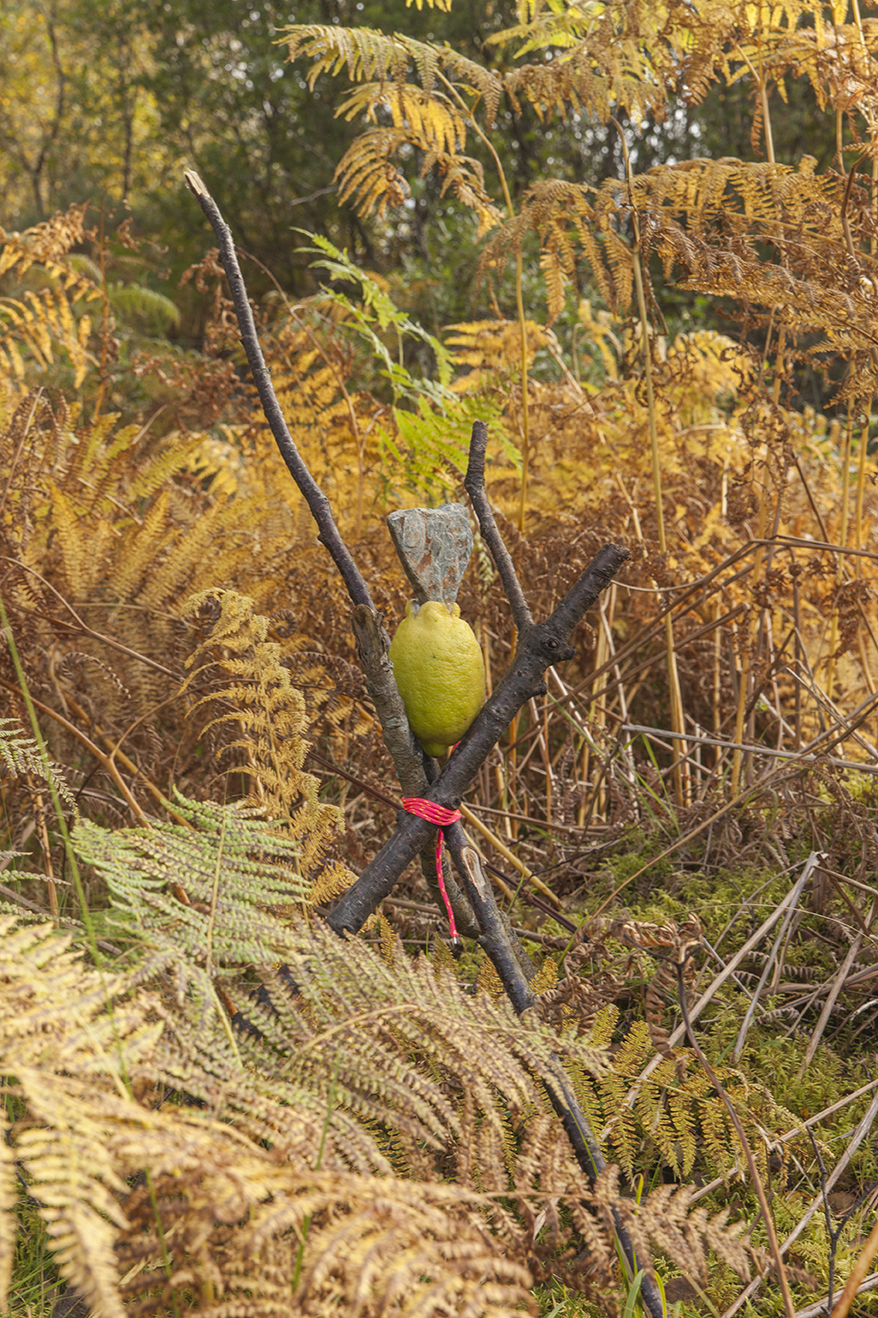 The simple act of selecting and tying objects together gives them energy, imbues vegetables with animal character. The pink string in its fluorescence calls attention to itself, to the human act involve in joining and making and building. It also has an absurd quality, it’s guy ropes, hi-vis outdoor-style, urban aids to living in the country for the weekend. How do we relate to nature if we just pop in and pop out, clothed, covered and coddled by magical fabrics; ones that shine and bead and reflect and puff and smooth and repel and wick and breathe. We imagine we are separate because we can import fruit on ships and planes and we can make a tent and see the ropes in the dark but it’s worth remembering that we aren’t, at best we’re just rearranging things for a chunk of time that we see as a line but everything else we’re in the middle of doesn’t give a fuck about, being busy with living as the rain rains and the sun suns and all the whole things spin around themselves. 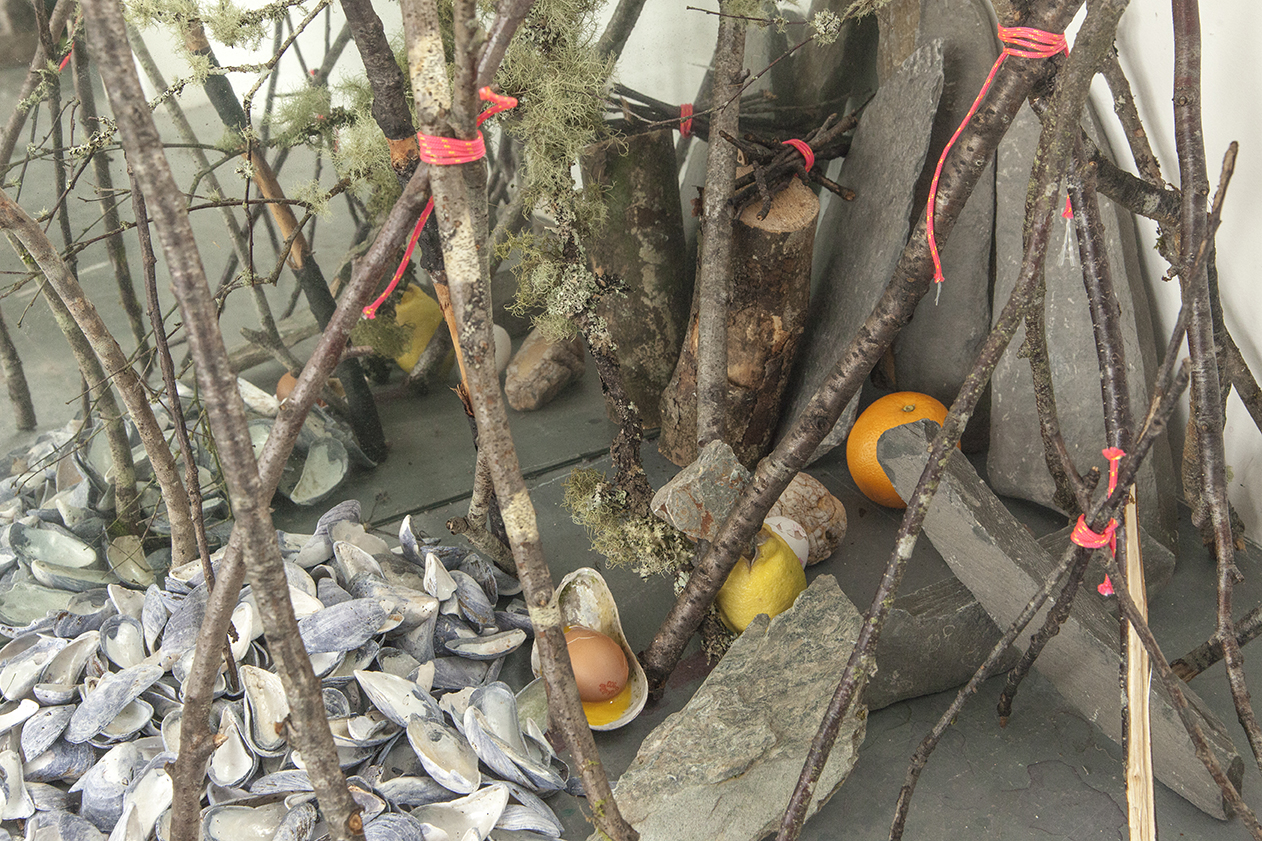 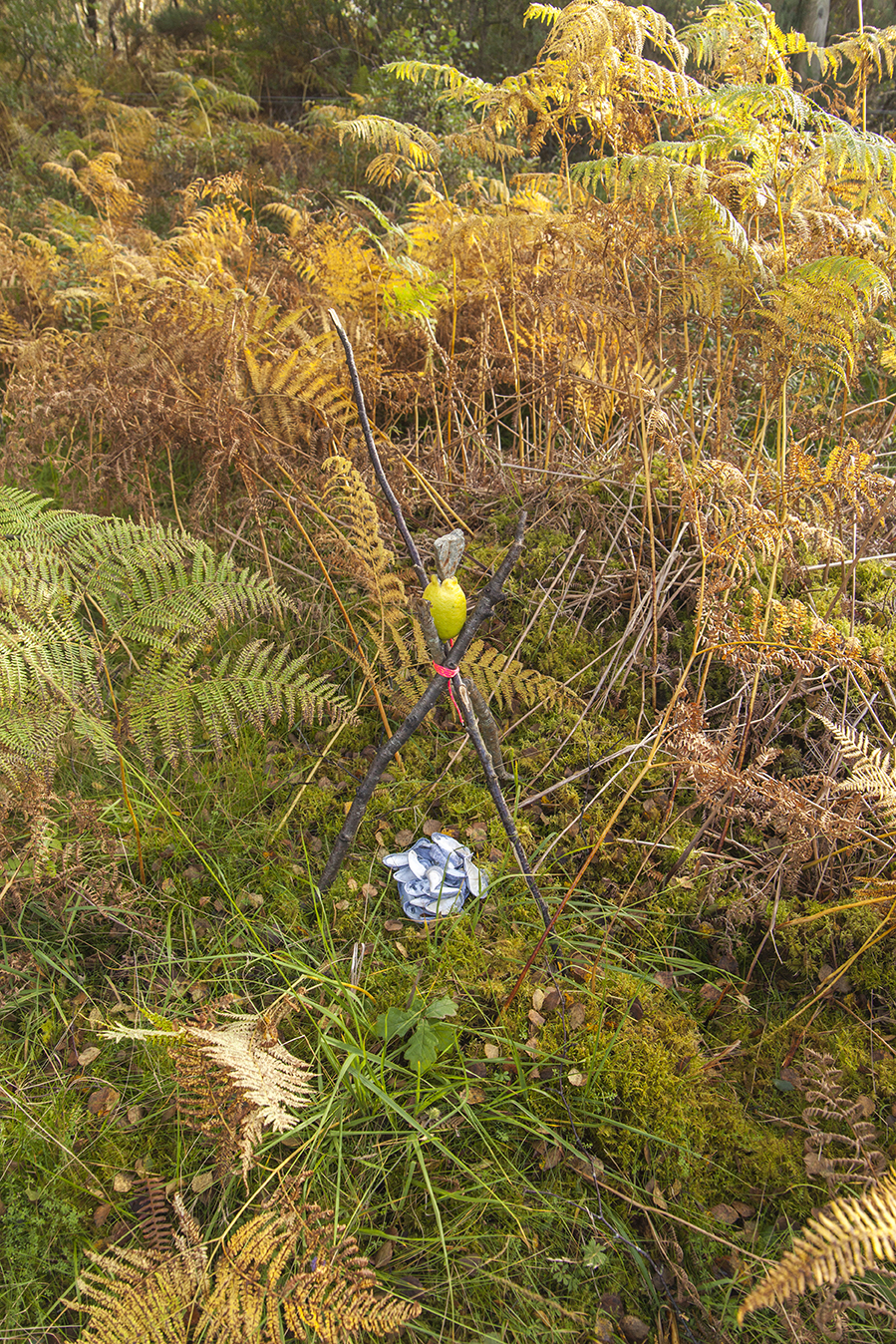 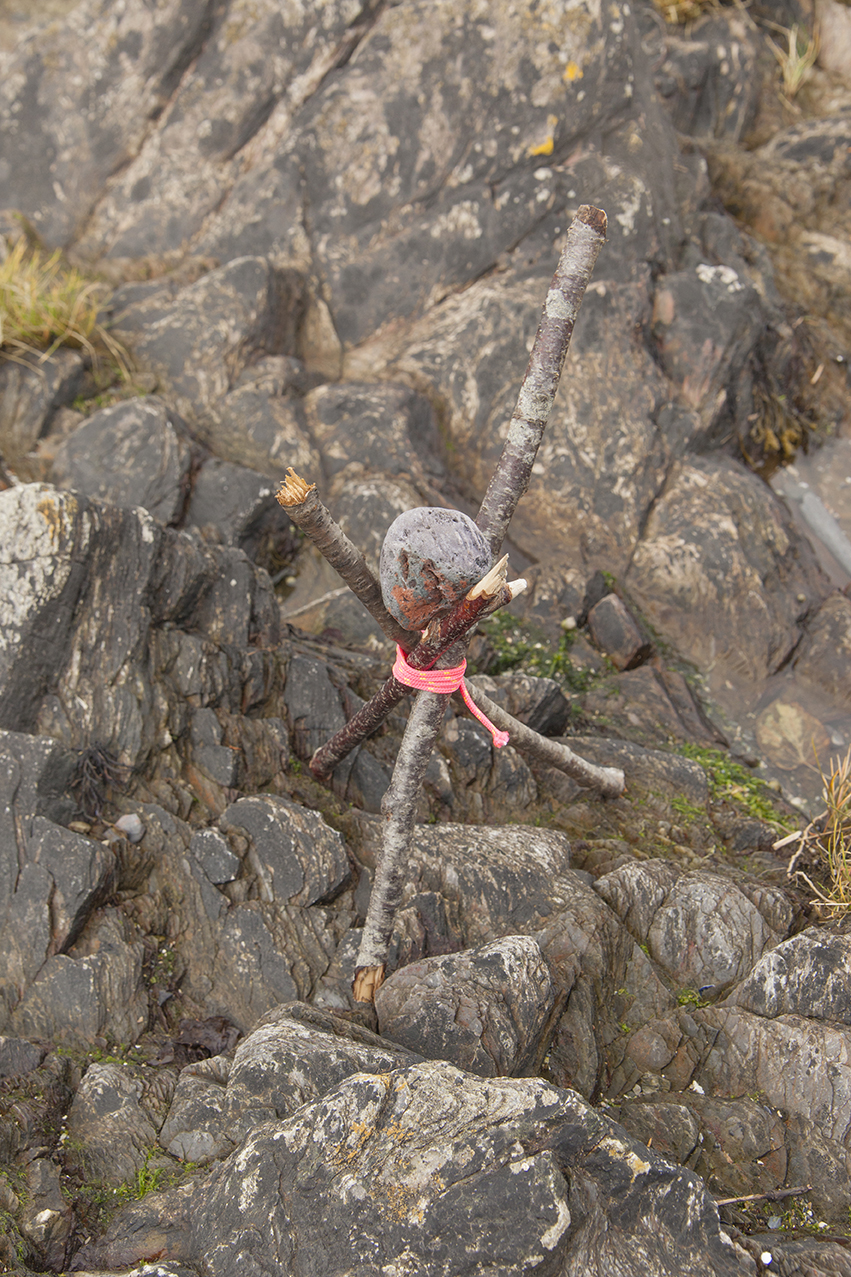 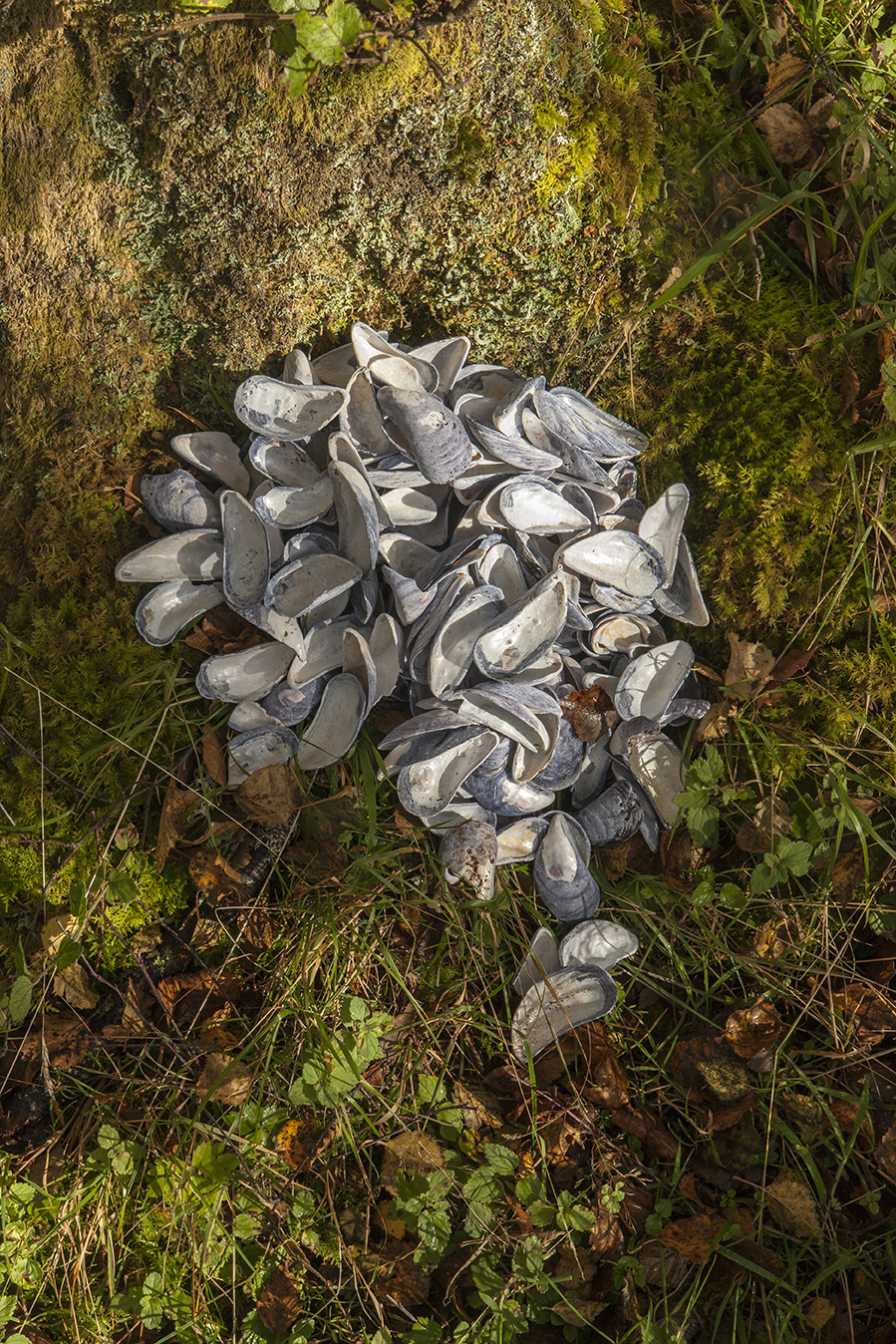 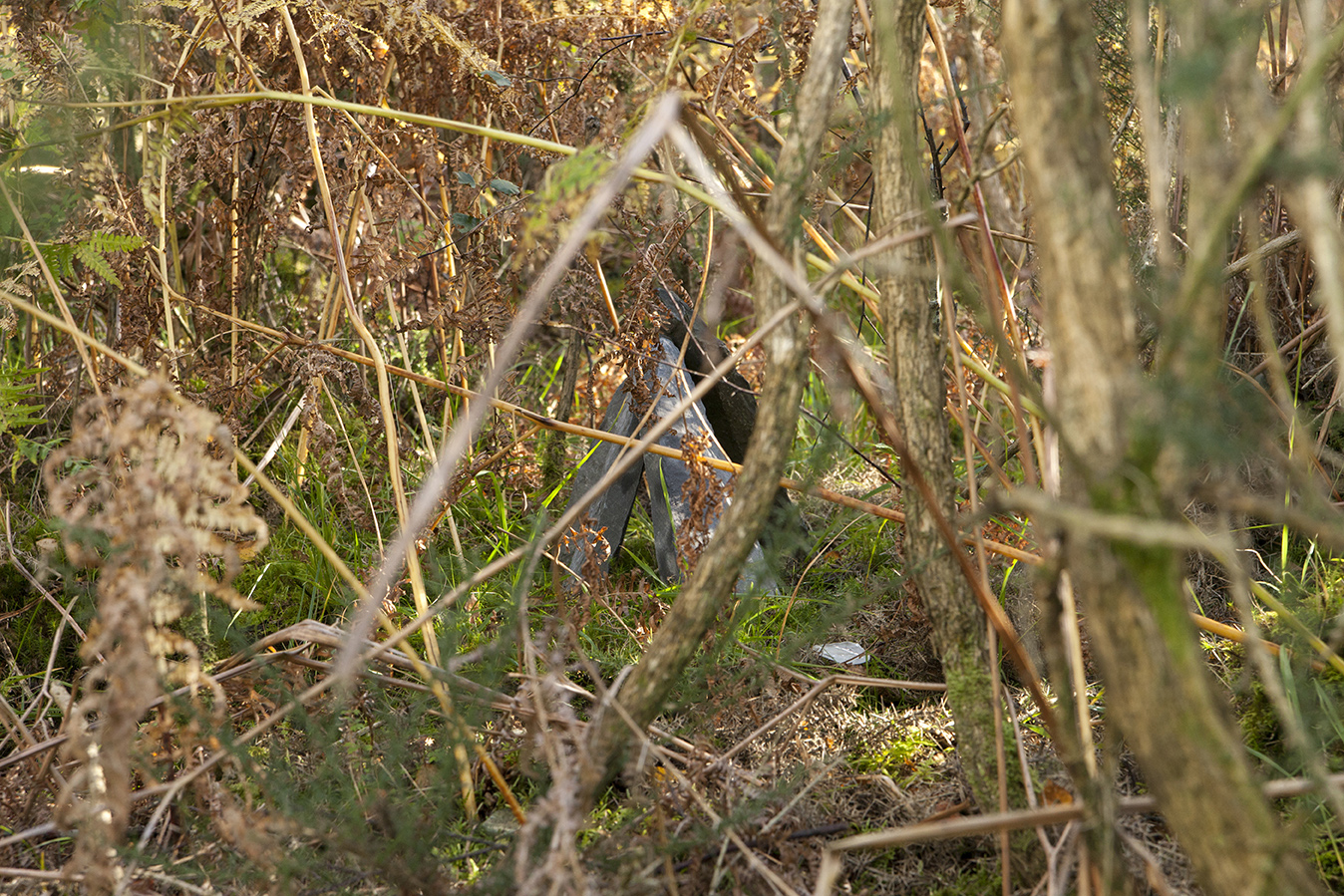 The loops of fluorescent cord untie easily, the sticks slip their bonds and get chucked on the floor in a pile of lines, their existence as sculptures, or animals (or whatever they were) was tenuous, their energy temporary, a temporary energy. It feels positive, noncommittal, I don’t have the responsibility for the object, just a temporary custodianship, a temporary involvement, temporary making. Then I can keep the cord rolled up and let the sticks go back outside and make homes for fungus and rot back in the humous; nicely humble, my interaction, my hand only transient, like everything else. 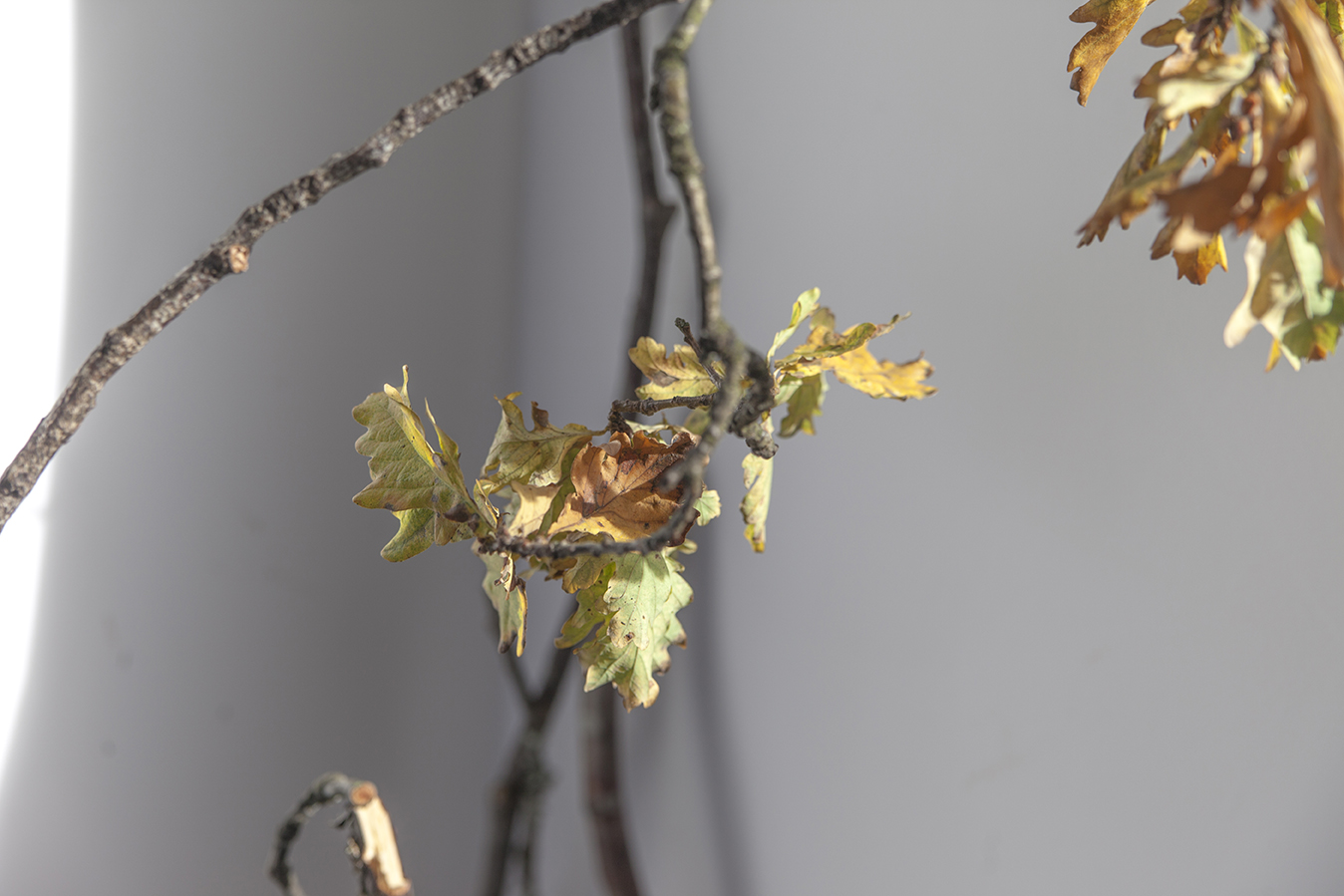